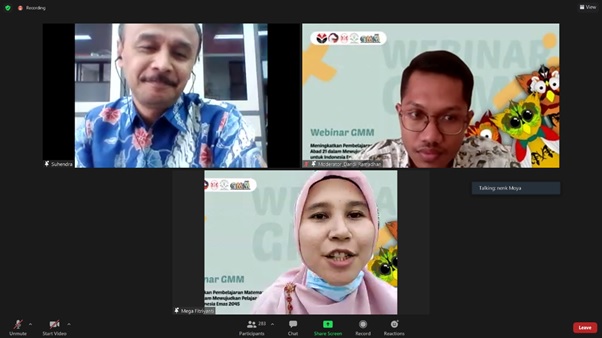 Gema Mahasiswa Matematika (GMM) 2021 webinar activity was held on Saturday, October 2, 2021 with the initial plan starting at 08.00 to 11:24 WIB. This webinar was attended by 352 participants with 36 organizers, 4 event devices, 1 speaker, 3 invited guests, and 308 participants from various regions in Indonesia. The theme of the GMM 2021 webinar is to Improve 21st Century Math Learning in Realizing Superior Students for Indonesia Gold 2045.
This webinar was opened by MC (Rifqy and Putrie) at 08.00 WIB, followed by Tilawah by Qori (Ilyas) at 08.05 WIB. This webinar began with a speech from the Chairman of GMM 2021 (Dasep), and continued with the speech of the Chairman of BEM ‘Himatika’ Identika UPI Period 2021 (Samsudin). After that, there was a speech from the GMM Guidance Lecturer (Dr. Al Azhary Masta, S.Si., M.Si). In the initial plan, this webinar will be welcomed by the Chairman of the Department (Dr.H.Dadang Juandi, M.Si.,), but qadarullah he was not present because there was a public lecture, so the welcome was represented by the Secretary of the Department (Mr. Al Jupri, S.Pd., M.Sc., Ph.D). The series of welcome events runs according to the rundown of the event. 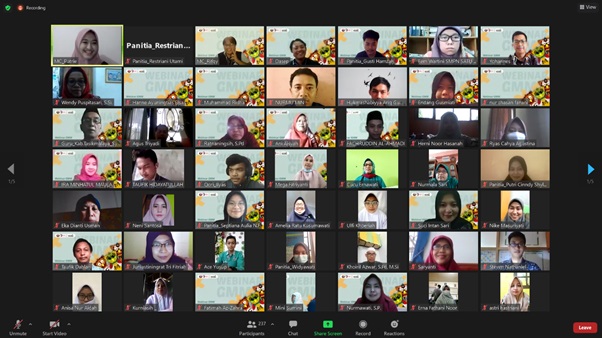 After the speech, the event is submitted from the MC to the moderator (Dandi) by reading the moderator’s CV first. The moderator reads out the source’s CV before starting the interview. The speaker at this webinar is Mr. Suhendra, M.Ed., Ph.D.,. The speakership starts at 08.45 WIB and finishes at 10.04 WIB. The completion time of the speaker is longer than the time that has been prepared in the rundown where the speaker is targeted to be completed at 09.45 WIB. In the question and answer session, participants were very enthusiastic to ask, but due to time constraints, there were only 3 questions received, namely questions from Bu Mega, Bu Nur Azizah, and Pak Hikmal. The Q&A session ends at 10:26 a.m. After the Q&A, there is a formal award of the e-certificate to the source.
One of the objectives of this webinar is to publish the race branch that will be competed in GMM 2021. So, after the speaker, at 10:31 PM the committee (Dasep and Putri Cinndy) filled the event with the publication of the race and opened a question and answer session also so that participants better understand the race branch to be held. After all the series of events is completed, then there is a doorprize announcement for participants with the first registrant category, enter the first Zoom Meeting room, and the first questioner.
After that, the event ended with a prayer by Qori (Ilyas) and continued with a documentation session. The event finished early at 11:02 PM, while the rundown event is expected to finish at 11:25 PM. Overall the event went smoothly.
(Annisa Ul Husnah)