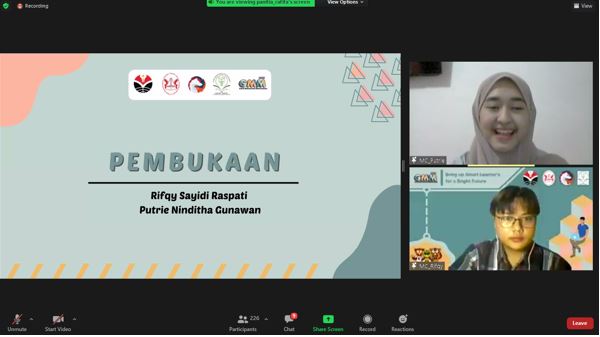 The opening of Gema Mahasiswa Matematika (GMM) 2021 was held on Saturday, October 30, 2021 with the initial plan starting at 08.00 to 11.00 WIB. The purpose of this event is to officially open GMM 2021 activities. The opening of the GMM was attended by 263 participants with 43 organizers, 3 event devices, 9 invited guests, and 208 participants and guidance teachers from various regions in Indonesia. The theme at the opening of GMM 2021 is Bring Up Smart Learner’s For A Bright Future.

After that, there was a speech from the GMM Guidance Lecturer (Dr. Al Azhary Masta, S.Si., M.Si) at 08.48 – 08.56 WIB, the guidance lecturer’s speech was more than 6 minutes from the planned time, because the speech was longer than the targeted time of the committee which was up to 08.50 WIB. The event continued with a solo vocal performance from students of the Department of Mathematics Education (Annisa Fitri Adawiyyah). Then it was resumed with a speech from the head of the Mathematics Education program (Dr. Elah Nurlaelah, M.Si) at 09.04 – 09.13 WIB and after that, a speech from the head of mathematics program (Dr. H. Cece Kustiawan, M.Si) at 09.13 – 09.18 WIB.

In the initial plan, this event will be welcomed by the Chairman of the Department (Dr.H.Dadang Juandi, M.Si.,), however. Qadarullah he was not present, so the welcome was represented by the Secretary of the Department (Mr. Al Jupri, S.Pd., M.Sc., Ph.D) as well as officially opening the GMM 2021 event, the Department Secretary’s speech was carried out more than 6 minutes from the committee’s planned time. However, the entire series of welcome events goes according to the rundown of the event.

After the welcome, there was a screening of the GMM teaser video which aired at 09.27-09.29 WIB. This GMM teaser video illustrates that GMM 2021 activities are followed by many participants from various regions in Indonesia, in which there is also an explanation of various races in GMM 2021. After that, there was an acoustic performance from students of the Department of Mathematics Education (Marvel and Martin) at 09:29 WIB. The event continued with the GMM 2021 sponsorship presentation, namely First Media, at 09.40-09.52 WIB.

After that, the event ended with a reading of the do’a by Alyas and continued with a documentation session. The event finished early, which is at 10.17 WIB, while in the rundown the event is expected to finish at 11:00 PM. Overall the event went smoothly.